The Trump campaign on Tuesday blasted Democratic Rep. Joaquin Castro, the brother and campaign chairman of 2020 presidential hopeful Julian Castro, for publicly posting a list of prominent Texas Trump donors’ names and employers — accusing him of “targeting” private citizens and demanding he delete it.

He added: “Should delete & apologize. Castro campaign should disavow.”

Murtaugh’s tweet blacked out the identifying information that Castro cited.

But the Texas congressman’s original tweet included a list of San Antonio residents who had donated large amounts to the Trump campaign, along with the names of their employers. It is unclear who actually compiled the list.

“Sad to see so many San Antonians as 2019 maximum donors to Donald Trump,” Castro tweeted, along with the Twitter handles of several owners of local businesses who apparently donated to Trump. “Their contributions are fueling a campaign of hate that labels Hispanic immigrants as ‘invaders.’” 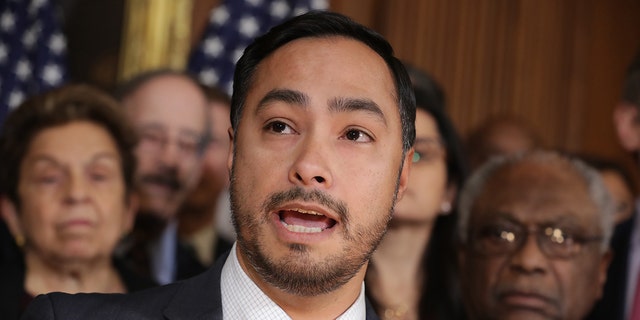 The list, titled “WHO’S FUNDING TRUMP?” had 44 names of donors and their employers.

A Trump campaign official slammed Castro for sharing the list of names, saying “in this political climate, particularly at a time when Democrats are associating rhetoric with violence, it’s a pretty disgusting thing to do.”

Castro did not respond to Fox News’ request for comment.

Castro’s tweet comes as 2020 Democratic presidential candidates are criticizing President Trump’s rhetoric, and even branding him a racist, in the wake of this weekend’s back-to-back mass shootings in El Paso, Texas, and Dayton, Ohio that left 31 people dead. Democrats have ripped the president, called his statement from the White House on Monday weak, and even helped to pressure The New York Times to revise a front-page headline that did not sufficiently challenge Trump’s call for unity.

Castro’s brother, former Housing and Urban Development Secretary Julian Castro, also slammed the president, saying he has embraced “division and bigotry” and is “fanning the flames of hate” as a form of “political strategy.”

“There is a huge difference … between running your mouth and running for president, and being the president and trying to bring together a nation,” Counselor to the president Kellyanne Conway said on “Fox & Friends.”  “The president did not respond in kind. They politicized this over the weekend. They all blamed him and I want to name and shame them now. … They want to be president? He is the president. And he is trying to bring the country together and have bipartisan, bicameral steps.”

How to Stop Humans From Filling the World With Trash

What Higher Gas Prices Could Do to the Economy

Lindsey Graham dishes on Trump in hoax calls with Russians –...